Let's have some auctions!

Hi everyone! As a follow up to my sales, I'm back with a round of auctions!

Ah, I meant to make a bigger post about this trip but it will have to wait, as I've got a lot to get done my last few days here in Osaka!

However, I wanted to post to offer up my extra pilot Pikachu plush! They are exclusive to the Kansai Airport's Pokemon Store, though there is another version exclusive to Chitose Airport in Hokkaido. (However, none are available at the Pokemon Centers!)

While I am still in Japan, I'm asking $35 shipped for them. Shipping within the US will be somewhat cheaper (so probably $29 or so total), but I wouldn't be able to ship them until August. Thanks to USPS international postage hikes, shipping from the US to anywhere else (even Canada) is now more expensive than shipping from Japan.

Here he is, in his little jacket and tie! 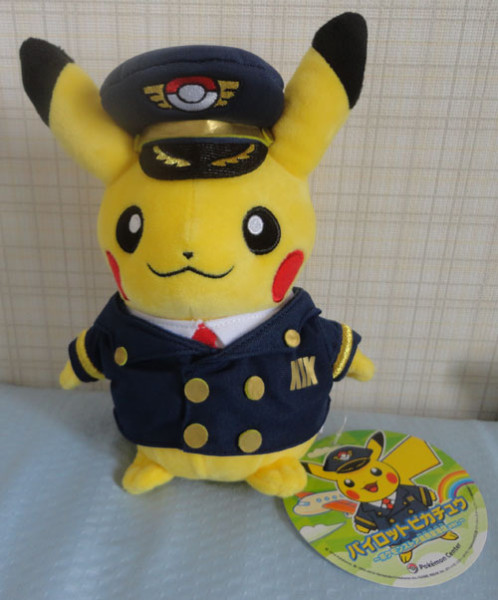 The rules were posted online, and were basically:

1) Single battle, 3 vs 3.
2) You can only use one of: Xerneas, Yveltal, Zygarde, and Mewtwo.
3) You can also use the event Darkrai (given out with this year's movie ticket)
4) You MUST use one of the PC giveaway Mega Pokemon. These were Kangaskhan, Scizor, Gyarados, Gengar, Tyranitar, and Mawile. They had to be holding their Mega stone, but did not have to Mega Evolve during the battle.
5) Your Pokemon must either be in the Kalos dex, or brought over from a past Pokemon game.
6) Pokemon are leveled down to 50, no duplicate items or Pokemon, etc.

I couldn't find clarification on a few rules until today, so unfortunately I wasn't able to prepare much. Rule 1 was not 6-choose-3, as I had hoped, but 3-choose-all. From Rule 4, you had to use an actual ribboned event one of those Pokemon, which meant I had to choose between Gengar and Tyranitar, because I didn't have Mawile yet and I didn't arrive in Japan early enough to get the others. I had a nice Mewtwo from FRLG, but apparently it had to be an XY Mewtwo, so I wasn't able to use it. Also, I wondered about the loophole in Rule 5, but past ubers like Dialga were not allowed.

The tournament started when the Center opened at 10 am, and ran until 2 PM. I arrived about 10 minutes after 10, and there was (of course) still a long line to get registered.

Here is how the tournament worked:
There were about 6-8 tables for 4 people each, so there could only be something like 12-16 battles going on at a time. (Presumably you could also battle in line, but it wouldn't count towards the tournament.) While you were in line, one of the staff would come check your Battle Box to make sure your team was valid for the tournament. They were checking OTs and ribbons too, so a Gyarados I'd bred myself wouldn't have been valid. Once your team was checked, you were supposed to close your DS so you couldn't change anything. When you were at the front of the line and a space freed up, the staff would direct you to your table.

The tables had no chairs, but were not at an adult standing height (maybe 2 1/2 feet off the ground?) so unless you were a little kid, you had to either kneel or crouch. Then you and your opponent connected games and off you went!

I had assumed that since people were able to bring 2 legendaries (Darkrai and someone else) all the top-level players would have them, that wasn't the case. My first opponent actually had only a Zapdos for legendary Pokemon. I was glad to see I wasn't losing out for not having access to a Xerneas, and it ended up that none of the people I battled had one, although I did see people battling with them while I was in line. (Xerneas has type advantage over Yveltal, Darkrai, and Zygarde, so I assumed they'd be the most prevalent uber.)

After the battle, someone (usually the winner) would raise their hand, and a staff would come over, confirm who won, and stamp the winner's sheet. The winner stayed at the table to play another game, and the loser had to leave the tables. The loser could get back in line, but it took about an hour to get to play again, so in a four hour tournament it's a pretty big penalty. This is why I only got to battle 3 times (and lost all of them, doh). I may have been able to get in one more, but I hadn't eaten much that day and I didn't think I had very good chances, so I left at about 1 to get some lunch.

A little after 2 pm, they gathered the players together to determine the winners. This was done by asking the crowd, "Who has more than 15 stamps?" and so on. There were only 20 spots per sheet, so some of the winners actually had two sheets! If I remember right, the top 4 players had 27, 25, 18, and 15. There were two players with 15 stamps, so how did they break the tie? A deathmatch battle? Nope, they had them play rock-paper-scissors. Yep, their luck in a single game of rock paper scissors determined who would get a medal and advance to the next stage.

After I finished battling, I wandered the PC a bit, and was pleased to find that not only had they stocked the Hydreigon DX Kid (which I didn't have yet), but they'd also restocked the Mega Lucario plush, who was previously sold out both at the Center and on Amazon. I'd decided I wanted one (before seeing that they were sold out), and Lucario was also my Mega of choice during the tournament, so it was a neat souvenir for the day of the tournament. I took a photo of him with the tournament sign too - would liked to have had one of myself holding him next to it, but the staff were all busy getting ready to announce the winners...anyway, he'll help me remember the tournament! 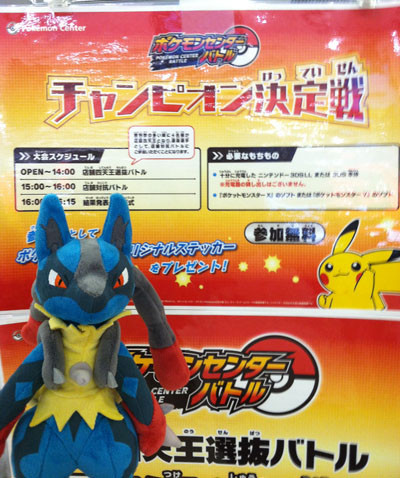 I also got a special sticker just for participating. I lucked out and happened to get an awesome Mega Pokemon! 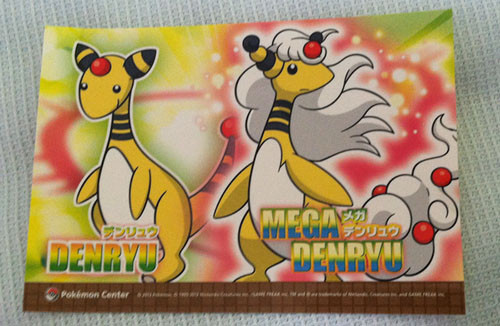 On the way back, I checked out the progress on my newly-started Pokemon streetpass game. It showed a max of 99 streetpasses...I wonder how many there really were? 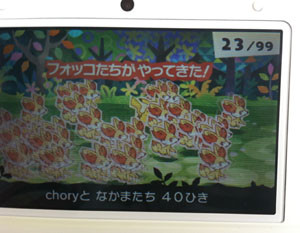 Anyway, I'm here in the Osaka area for another week or so, then I head back to Tokyo! It's been a lot of fun visiting here and I have more appreciation for Kansai now, but I will be happy to see friends again :D

I just picked up my grail from the post office! \o/

I will be doing a box stream tonight at 10 pm EST, since I want to give more people a chance to watch and chat :) Ustream, not Livestream, is the one that doesn't have ads cutting into the video, right? If they both do that, I will probably switch to Livestream since I've used it before, but anyway, here's the link!
http://www.ustream.tv/channel/happyjolteon

After a long week of watching and waiting,

I won my grail Dialga plush!!

He seems to be in great condition, and even has his lotto tag! (Phew, no more worries about finding one that some kid had worn and abused for years before shoving in a closet!)

I will of course be making a post and talking about him lots more when he gets here, but for now, I am doing a bit of reorganizing of my Dialgas and dusting to prepare for photos.

After so long, it's a bit jarring to not have his photo at the top of my wanted list...
http://pokeai.net/toz/dialga/wanted.html